These are the first public photos of the massive diorama of the Battle of Chunuk Bair, which officially opens on Monday morning at The Great War Exhibition in Wellington, New Zealand.

This 10-metre diorama with five thousand 54mm miniature figures commemorates the brave deeds of both New Zealanders and Turks, and the horrors they went through on that August day a century ago.

The diorama is situated in the ANZ New Zealand Room, part of The Great War Exhibition at the old Dominion Museum in Wellington. Entry is free.

Note: Could I please ask New Zealand wargamers to publish a link to this posting on their club websites, so all 140 volunteer painters around the country get to see these pictures of their handiwork in its final setting.

We'll start with a few pictures taken during the construction of the diorama at Weta Workshop in the Wellington suburb of Miramar. At the time we weren't allowed to publish these photos because they showed too much of the diorama or too many figures, which Sir Peter Jackson wanted kept a surprise until after the opening. 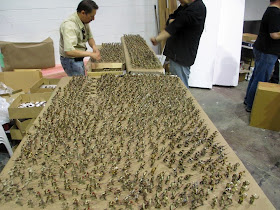 Only some of the thousands of 54mm figures - all of which had to be individually unwrapped after being sent to Wellington by painters from around the country.

Each figure was then checked, paint jobs touched up if necessary, dust sprayed onto the boots, and matt varnished. 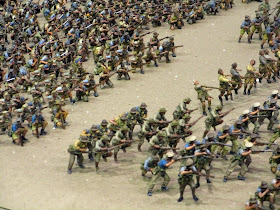 Here are some of the many New Zealanders.  It helped to initially sort the thousands of figures into poses, so that we could then break then into their separate units. 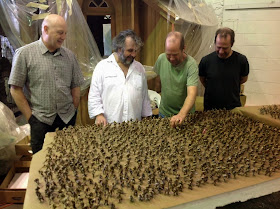 Sir Peter Jackson reviews the troops, accompanied by Rhys Jones (aka 'Armchair General', which is a nickname he is fully entitled to, being a retired Lieutenant General in real life!), and UK sculptors extraordinaire, Michael and Alan Perry. 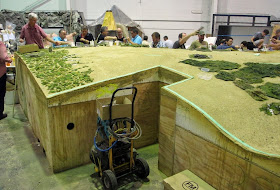 The real terrain around Chunuk Bair was mapped by laser surveying, and the digital map was then used to guide the computer controlled lathe to shape large blocks of styrofoam to form the miniature terrain. 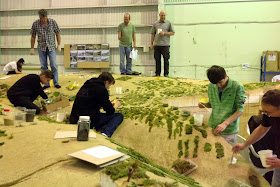 Herman van Kradenburg (Kapiti Wargames Club), Michael Perry (Perry Miniatures, UK) and Rhys Jones (aka 'Armchair General') stand atop the terrain at Weta Workshop, as other volunteers start applying the foliage. On the wall are reference photos of the real-life vegetation at Gallipoli. 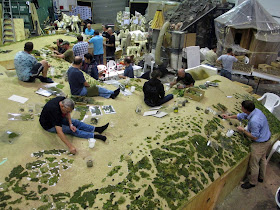 Even though it looks like a picnic, applying the vegetation to the terrain was a huge job, and took about two weeks. 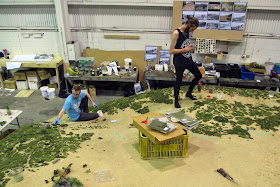 All of New Zealand's model shops must've been denuded of every bit of terrain material they had in stock!

Next we see some photos taken after the diorama terrain was transported from Weta Workshop into its new home at the old Dominion Museum in Wellington. 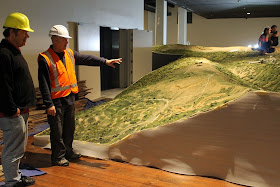 Rhys Jones (Armchair General) points out to volunteer painter Phil Sirvid how the terrain was transported to the museum in blocks sized to fit into the building's elevator.  They were then reassembled, and the joins disguised.  As this was a construction zone, this must be one of the only dioramas ever where hard hats were required!

Michael and Alan Perry commence the job of inserting the figures into the terrain.  This picture shows only part of the whole diorama!  Note the viewing platform, and the tracks for the glass walls that will enclose the diorama. 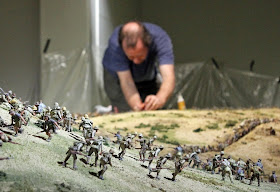 Inserting the figures was back-breaking work. The figures came with a long pin under one foot, which had to be pushed into the terrain. Care needed to be taken to not sit or stand on any figures or terrain pieces. 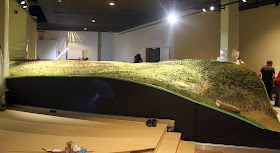 This photo is taken from the rear of the diorama, looking at the back of Chunuk Bair and Hill Q.  This is just a small portion of the complete diorama.

Alan Perry inserting hundreds of New Zealanders and British into the two trench lines atop Chunuk Bair. High resolution scans of aerial photos taken in October 1915 reveal the remains of the New Zealand trenches, so these are positioned exactly as they were in August.

Apart from the first picture, I took most of these pictures a couple of weeks before the opening, when the protective glass walls weren't yet in place. But not quite all the figures had been placed yet, and the final lighting wasn't installed either - so the real-life diorama is even more amazing than in these photos. 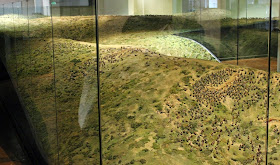 When you enter the New Zealand Room, you are confronted with a massive landscape, estimated at over 10 metres long and just as wide.  This photo was taken later than the others in this series, as it shows the glass walls in place. 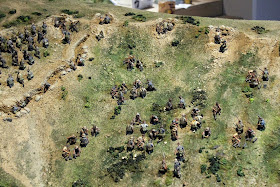 The first part of the diorama you see is a knoll called The Apex. Men of the Maori Contingent rest on the right, whilst at the bottom the first of the reinforcements from the Auckland Mounted Rifles are beginning to arrive. Machine guns line the crest.  This is one of the parts of the diorama that has been subsequently populated with many more figures since I took this photo. 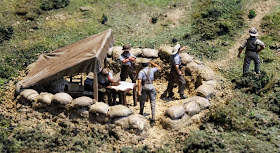 At the foot of The Apex is Brigadier Johnston's rough dugout. You'll see the Brigadier looks a bit indisposed, sitting at the table with his head in his hands. Polite accounts claim Johnston was 'ill' on the night of the attack. Other less euphemistic versions maintain that he was 'fighting drunk'. 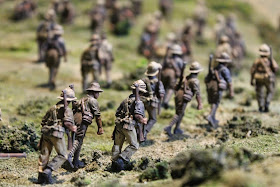 Reinforcements of the Auckland Mounted Rifles trudge up to The Apex 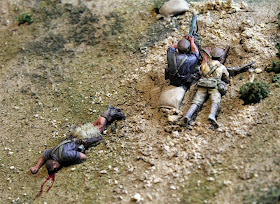 One of the twelve machine guns that were sited around the crest of The Apex. From their positions, they could throw a withering fire on the Turks, but The Apex itself was not safe from Turkish return fire from other positions in the surrounding hills.

Away to the right, Turks on Battleship Hill jump out of their trenches to attack the New Zealanders on Chunuk Bair, but many are cut down by the Kiwi machine guns on The Apex. 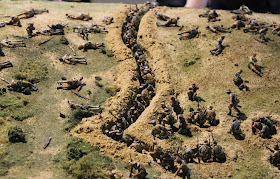 Walking down the side if the diorama, ahead of The Apex we see another group of figures clustered round a knoll called The Pinnacle.

Survivors of the previous day's costly charge by the Auckland Battalion have dug in desperately at The Pinacle, surrounded by their casualties. 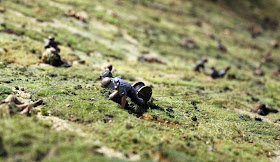 Looking further up the ridge of Rhododendron Spur, we see Corporal Cyril Bassett hauling a telephone line up the hill.  In full daylight and under a continuous and heavy fire, Bassett succeeded in laying a telephone line from the old position to the new one on Chunuk Bair. He received the only Victoria Cross awarded to a New Zealander in the Gallipoli campaign. 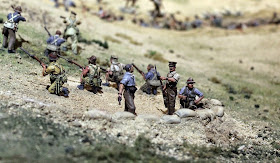 This is where Corporal Bassett is reeling his telephone line towards: Lt Colonel William G. Malone's small command trench, located just below the trenches on Chunuk Bair. Malone, commander of teh Wellington Battalion, was later killed in this spot by friendly fire, either from supporting artillery or possibly naval gunfire.

Finally we reach the first of the two trenches on top of Chunuk Bair.  This position would prove hard to defend. It was only possible to scrape shallow trenches amongst the rocks. The peak was exposed to fire from the main Ottoman line from Hill Q to the north and on Battleship Hill to the south. 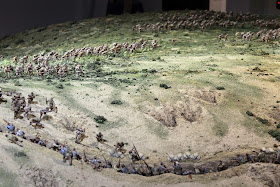 Next we see the second trench, being charged by company after company of Turks.  Note the shell craters in front of the trench. This trench originally belonged to the Turks, but an artillery barrage the previous night had caused them to evacuate.  When the Wellingtons clambered up Chunuk Bair at dawn, they found this trench barely occupied, so made it their own.

Looking along the forward trench, we can see vicious fighting as the Turks try to re-take their trench from the Wellingtons. 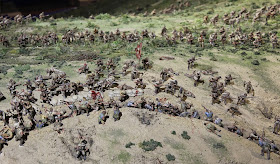 Another view of the Turkish attack on the forward trench. Parts of this trench were eventually overwhelmed by the Turkish onslaught, not to mention by the enfilading fire that the Turks could pour into it, especially from Hill Q. 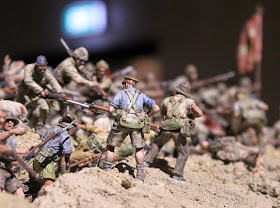 Another picture of the trench fighting, as the New Zealanders try to stave off the Turkish attack. 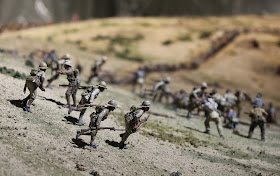 Visible on the left, Sergeant-Major Wagner rallies the British 7th Gloucesters, identifiable by their full uniforms and Wolseley helmets. Wagner took charge after every single officer in the unit was either killed or wounded.

As we step round the back of the diorama, we can see the slopes of Chunuk Bair alive with Turkish reinforcements.  Loose formations of  Turks charge up the hill towards the forward New Zealand trench near the crest. 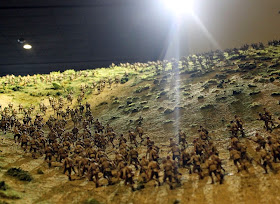 Behind Chunuk Bair, more Turkish reinforcements begin climbing the hill. After the Wellingtons were eventually relieved, and after another day of vicious fighting, the Turks eventually over-ran both trenches, and Chunuk Bair returned to their hands for the remainder of the Gallipoli campaign. 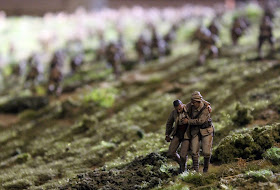 Everywhere you look in the diorama, you'll find sad little vignettes of the hundreds of casualties.  For example, here is a wounded Turk being supported back down Chunuk Bair ...

... and here are just a few of the hundreds of allied casualties. This diorama is not a typical sanitised wargames table. It will be an eye-opener in terms of reality for a lot of people, as you don't normally expect to see so many casualties amongst 'toy soldiers'. 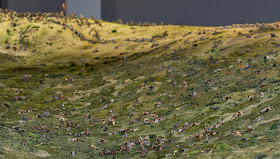 This photo taken by Andy Palmer is the most moving picture I've ever seen of any battle diorama. I had initially ignored this shot as a reject, because it had a lot of out-of-focus foreground.  But when I by chance zoomed in on it, the result was unbelievable and harrowing - as you can see in the cropped picture here. If you haven't clicked on any of the other pictures in this blog to enlarge them, this is one you've just got to see full-sized. I don't think any other media - photo, painting, film, book - has ever caught the carnage of Chunuk Bair in quite this way.
[This photo taken by Andy Palmer www.acpalmer.co.nz]

Finishing on a lighter note, the middle guy in this photo is the special figure that the Perrys sculpted of me, directing traffic in one of the trenches.
[This photo taken by Andy Palmer www.acpalmer.co.nz]

Our Armchair-General (the special model made by the Perry twins of project coordinator Rhys Jones) can be seen waving the troops to move forwards. 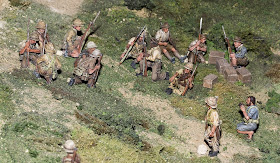 And what Sir Peter Jackson production would be complete without him doing a cameo?
[This photo taken by Andy Palmer www.acpalmer.co.nz]

These aren't all the photos that have been taken of the diorama - we've still got a lot more of them kept under wraps for the wargaming press and for an exhibition booklet.

Don't forget to also check out the latest news about the diorama.